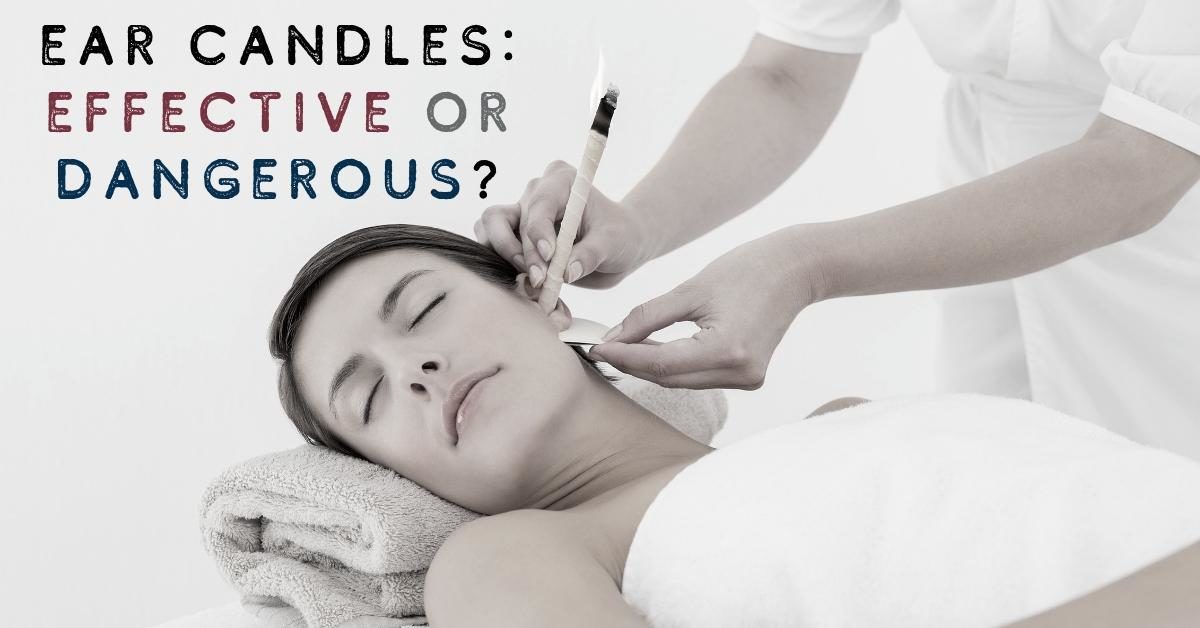 Best known as an alternative approach for earwax removal, ear candling involves placing a hollow, wax-covered candle in the ear. Proponents claim that lighting one end of the cone creates a suction that pulls earwax out of the ear.

How do ear candles work?

Ear candles are hollow cones made of fabric covered in paraffin wax, beeswax, or soy wax, and are usually about a foot in length. The pointed end of the candle is placed in your ear while the slightly wider end is lit. The people who believe is ear candles, claim that the warmth created by the flame causes a suction that pulls earwax and other impurities out of the ear canal and into the center of the hallow candle. While practicing this procedure, you lie on your side with one ear facing down. The practitioner inserts the pointed end of the candle into the hole of the ear that’s facing up and adjusts it to create a tight seal in your eardrum. You should most definitely find someone to help you with the procedure because the open flame that occurs is a risk because of the open flame involved in the procedure.

In most cases, a circular guard of some sort is placed about two-thirds of the way down the candle to catch any dripping wax. To be safer it is recommended to cover your head and neck with a towel for more protection. Guidelines also suggest holding the candle straight so any drippings roll down the side rather than dropping into the ear or onto the face. The candle should burn for up to 15 minutes all the while trimming the burned part as it turns to ash to prevent it from contaminating the tube. The procedure continues until only 3 to 4 inches of the candle remain.

Why use Ear Candles

Marketers of ear candles advertise them as treatments for issues with the ear including earwax buildup, earaches, swimmer’s ear or ear infections, sinus infections or other sinus conditions and symptoms of  cold ,flu, vertigo or dizziness.

After the procedure, the practitioner usually cuts the candle open vertically to show the patient the dark colored material that was drawn out of the ear, but is that really what that dark-colored matter is? While proponents of ear candles say it is wax and impurities, many scientists say that this claim is unsupported.  According to the American Academy of Audiology, there is no scientific evidence that ear candling pulls out debris from the ear canal. Scientific measurements of the ear canals before and after candling show no reduction in earwax. In many cases using ear candles has been proven to make ear issues worse.

The Dangers of Ear Candles

There is no evidence showing any benefits of ear candles but there is plenty showing potential risks. The U.S. Food and Drug Administration (FDA) has issued to consumers and healthcare providers not to use ear candles because they can cause serious injuries, even when used according to directions.  Ear candles can cause fire, burns, perforated eardrums, ear canal blockage and in some cases hearing loss.

Is it Safe to Clean your Ears at Home?

Usually, your ear canals shouldn’t need cleaning. Earwax is a naturally-produced substance that self-regulates and your ears will self-clean. However, if too much earwax builds up and starts to cause symptoms, you might have something called cerumen impaction. This means earwax has completely filled your ear canal and it can happen in one or both ears.

If your problem isn’t serious, but you do feel like you have too much earwax buildup, you can gently clean the outside of your ears using a washcloth. While you may think it’s safe to clean out your ears with over the counter earwax softeners this could create more trouble than it’s worth.  The ears are a fragile system that is easy to injure and very complicated to correct. If earwax is impeding your hearing, visit your doctor for safe, professional removal.

If you believe that earwax is interfering with your hearing abilities, come visit us at Neighborhood Hearing Aid Center. In a routine exam, we can check your ear canals to see if wax is the issue.  We also provide comprehensive hearing health services, from hearing testing to hearing aid fittings. It’s best not to gamble with home remedies when dealing with your only pair of ears.