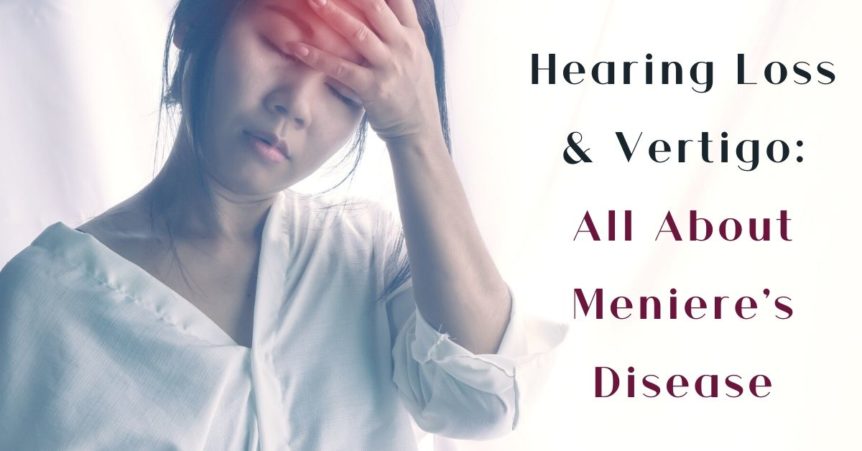 Meniere’s disease is a disorder of the inner ear, which causes episodes of vertigo, ringing or roaring in the ears (tinnitus), a feeling of fullness or pressure in the ear, and fluctuating hearing loss. In 1861 the French physician Prosper Ménière theorized that attacks of vertigo, ringing in the ear (tinnitus) and hearing loss came from the inner ear rather than from the brain, as was generally believed at the time. Ménière’s disease can develop at any age, but it is more likely to happen to adults between 40 and 60 years of age. The exact number of people with Ménière’s disease is difficult to measure accurately because no official reporting system exists The National Institutes of Health estimates that about 615,000 people in the U.S. have Ménière’s disease and that 45,500 new cases re-diagnosed each year.

A typical attack of Meniere’s disease is preceded by fullness in one ear. Hearing fluctuation or changes in tinnitus may also precede an attack. A Meniere’s episode generally involves severe vertigo, imbalance, nausea and vomiting as well as acute reduction of hearing. The average attack lasts two to four hours. Following a severe attack, most people find that they are exhausted and must sleep for several hours.

Ménière’s disease may start with fluctuating hearing loss, eventually progressing to attacks of vertigo and dizziness. Paying attention to the warning symptoms that precede an attack can allow a person to move to a safe or more comfortable place before Meniere’s disease truly begins. Some of the early warning symptoms include;

In addition to the above main symptoms, attacks can also include:

What are the major causes of Meniere’s disease?

While no one knows the actual cause of Meniere’s disease, the most prevalent opinion on the origin of Meniere’s disease is that an acute attack arises from fluctuating pressure of the fluid within the inner ear. A system of membranes, called the membranous labyrinth, contains a fluid called endolymph. The membranes can become dilated like a balloon when pressure increases. This is called “hydrops”. One way for this to happen is when the drainage system, called the endolymphatic duct or sac is blocked.

Some people with Ménière’s disease find that certain events and situations, sometimes called triggers, can set off attacks. These triggers include stress, overwork, fatigue, emotional distress, additional illnesses, pressure changes, certain foods, and too much salt in the diet.

Some treatments aim at reducing the severity of an attack while it is occurring while some treatments attempt to reduce the severity and frequency of attacks in the long term. Experts feel these medical treatments provide some degree of improvement in 60–80% of the treated people.

The most conservative long-term treatment for Ménière’s disease. Involves adhering to a reduced-sodium diet and using medication that helps control water retention like a diuretic. The goal of this treatment is to reduce inner-ear fluid pressure.

Medications used to treat Meniere’s Disease can be used during an attack to reduce the vertigo, nausea/vomiting or both. Some drugs used for this include anti-anxiety medicines like Valium or anti-nausea medicine like Dramamine.

Vestibular rehabilitation therapy (VRT) is sometimes used to help with the imbalance that can plague people between attacks. Its goal is to help retrain the ability of the body and brain to process balance information. When successful, this can help a person regain confidence in the ability to move about.