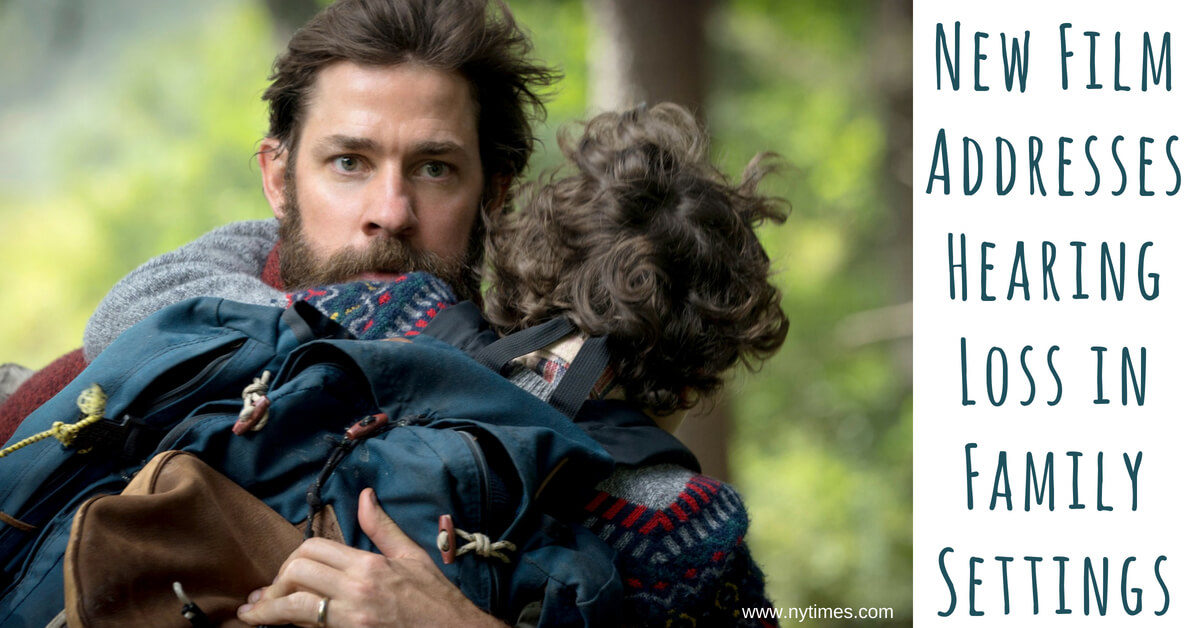 The new, groundbreaking horror film “A Quiet Place” is actually more than that. It is also an intimate drama which explores family dynamics, and the collection of memories, losses, joyful moments, fears and conflicts that family members share. In this particular family, not unlike many other families in America, one person is deaf while everyone else in the family is hearing. And while that character often sees her deafness as a burden to her family, in the end it is what saves them.

About the film (beware of spoilers!)

The film is set in the future, in the months immediately following a devastating alien invasion that has wiped out much of America’s population. The tagline for the film is “silence is survival”, and it is quickly revealed that making any kind of noise in this new world can get you killed: terrifying creatures with hypersensitive hearing hunt and kill those who make too much sound.

Thus, the family moves through their days as quietly as possible. The parents in the film, played by The Office’s John Krasinski–who is also the director–and Emily Blunt, make a compelling couple and manage to express love, fear, hope, anxiety and parental protectiveness without verbal language. The children are talented as well–Noah Jupe plays younger brother Marcus, and Millicent Simmonds, who is deaf in real life, plays the conflicted, strong and willful older sister Regan, who is deaf.

Many facets of Regan’s deafness become central to the story, from the fact that her family knows and is able to rely on sign language because of her, to her heroic turn in the final moments of the film, when she uses her cochlear implant to create a high-pitched feedback noise that proves to be the aliens’ only weakness.

John Krasinski described Ms. Simmonds as a “guide through what it’s like to experience the world without hearing it”, which helped him make the film more realistic. Krasinski and others on the crew worked to create “pockets of sound” that would allow viewers to hear what characters were hearing at a given moment, and the effect is that audience members can hear “through Regan’s ears”, whether the soundscape is total silence or vague sounds when she is wearing her cochlear implant.

Deafness as an advantage

This film highlights many aspects of deaf culture including sign language, hearing technology and uses sound effects to create an environment for people to have an idea what it is like living in a world with limited sound. The narrative of the film brings to the forefront the struggles that Deaf people face and raises awareness of the importance of sign language within the Deaf community and their families.

Simmonds’ character’s deafness keeps her family alive, but it also plays other, complex roles in the film. Sometimes it is a hazard to her when she can’t hear noise that might draw monsters, other times it is an amazing asset. It is also a source of conflict between Regan and her over-protective father. To Deaf and hearing viewers alike, it is new, and very welcome, to see a young deaf girl cast as a complex, nuanced hero.

In the dangerous world of “A Quiet Place” communication is key to survival, and it’s implied that the family is still alive in part because of their daughter’s deafness and the whole family’s ability to sign. The characters’ use of ASL, gestures and emotive facial expressions throughout the film also helps to draw viewers in without breaking the incredible spell of silence that the film creates.

Millicent, along with an ASL advisor and interpreter, helped to teach her fellow cast-members how to use ASL on set. The result is that when the characters sign on screen, it’s a compelling representation of the ability of sign language to express tenderness, fear, grief and complexity. For some viewers, this film serves as their first encounter with ASL, and it’s vital that it’s one created by a real user of the language.

“There’s a lot more to me than just being deaf”

While doing recent press for the film, Millicent has expressed her hopes that “A Quiet Place” will inspire other deaf people to follow their dreams and encourage directors and screenwriters to cast more #deaftalent, rather than casting hearing actors to play the parts of deaf characters.

In a Teen Vogue interview, she said, “I hope our stories continue to give people an insight into something that maybe they didn’t understand before. I hope seeing people like me on screen inspires more people to chase their own dreams and shows deaf kids anything is a possibility for them because I really don’t feel like my deafness was an obstacle or should be a big deal. I’m an actress. I’m also deaf. I like to read. There’s a lot more to me than just being deaf.”

You don’t have to live with untreated hearing loss. Contact us at Neighborhood Hearing Aid Center today for a comprehensive hearing test and hearing aid fitting.