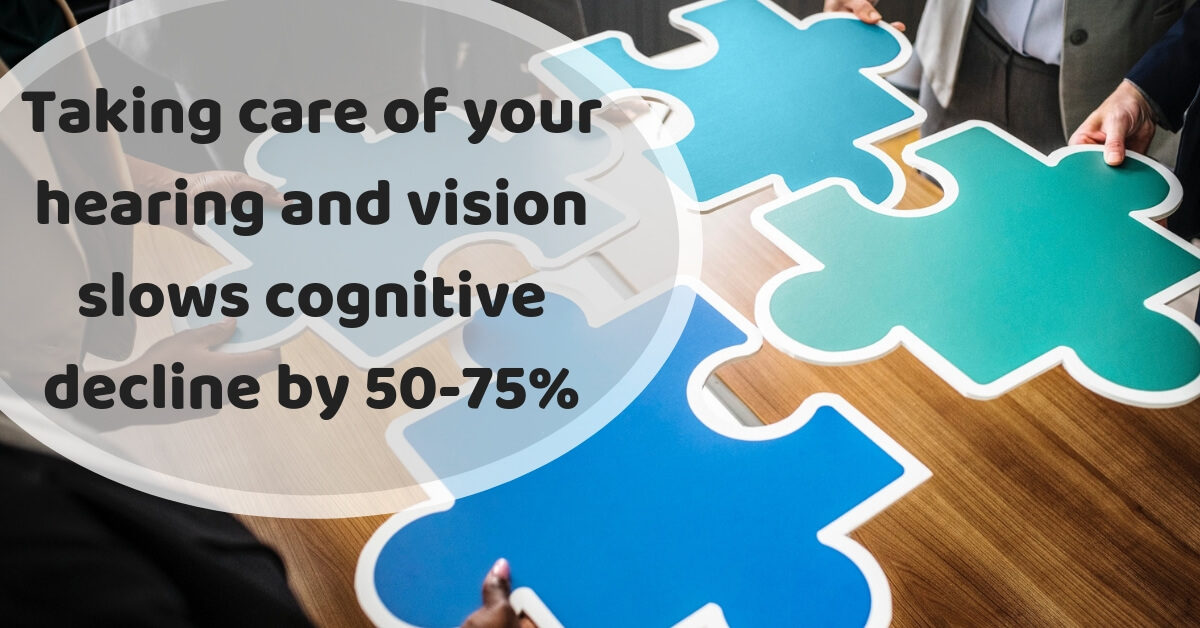 When was the last time you had a hearing test? Hearing tests at the Neighborhood Hearing Aid Center, as well as annual vision tests, are an important part of a health regimen. Taking care of your hearing and your vision has been shown to ward off cognitive decline by a significant percentage.

Growing old is a natural part of life, and varying degrees of cognitive decline is a by-product of aging. New research has shown that taking care of your eyes and your ears as you age, with regular exams and corrective measures, could help keep your brain sharper for a lot longer than previously thought. Presbycusis, or age-related hearing loss, is not uncommon. Nearly one in two Americans over the age of 65 have some hearing loss – and that’s a third of the population. Half of the adults over 85 years of age have age-related hearing loss. Unfortunately, hearing loss often goes undiagnosed and is undertreated.

Studies on Cognitive Decline and the Senses

The hearing/vision cognitive decline study looked at 2,000 seniors as part of the University of Michigan’s larger Health and Retirement study. The individuals in the hearing test had their hearing tested every two years for 18 years. Participants’ cognition was also reviewed during each hearing test with a range of tests, including word recall. For example, 10 words were recited and then recall was measured immediately. Participants then completed a series of small unrelated tasks to distract them from their memorization. Among people with hearing aids, the cognitive decline was found to be 75% slower then those with untreated hearing loss that participated in the study.

While acknowledging that more research is needed, scientists still surmise that the reason cognitive decline is affected by vision and hearing may be due to nerve stimulation provided to the brain. Sensory input by vision and hearing disappear if hearing and vision loss are not taken care of as people age. The part of the brain that processes the input from sound and from visual cues starts to shrink if there is hearing loss and reduced vision. The stimulation is recreated when hearing devices are used and  vision is corrected.

Social isolation has been found to be a byproduct of untreated hearing loss. It can also occur when vision problems are untreated. Social isolation is a contributing factor to cognitive disorders such as dementia.

People with hearing loss begin to withdraw from conversations and stop attending social functions. Social isolation starts the spiral into loneliness. It is easier to stay home than ask people to keep repeating themselves or deal with problems in noisy areas where your ears and brain can no longer isolate the conversation from the noise.  Withdrawing from social events and becoming isolated from friends and loved ones actually increases the chances of cognitive decline. Pay attention to reclusive signs from friends, loved ones and even yourself. This could be indicative of other health issues in your life.

Scientists agree that untreated hearing loss has a correlation with increased cognitive decline and that could put you at risk for dementia. Seeking treatment for hearing loss is an important part of maintain your overall health and well-being.

Today’s hearing aid models are lighter, more discreet, and easier to use. They can be adjusted remotely, and Neighborhood Hearing Aid Centers can do repairs and adjustments on site if needed. You can even “test drive” your hearing aids to ensure that they fit seamlessly into your life. Contact us at Neighborhood Hearing Aid Center today and set up an appointment for a hearing test. Live your life to the fullest!