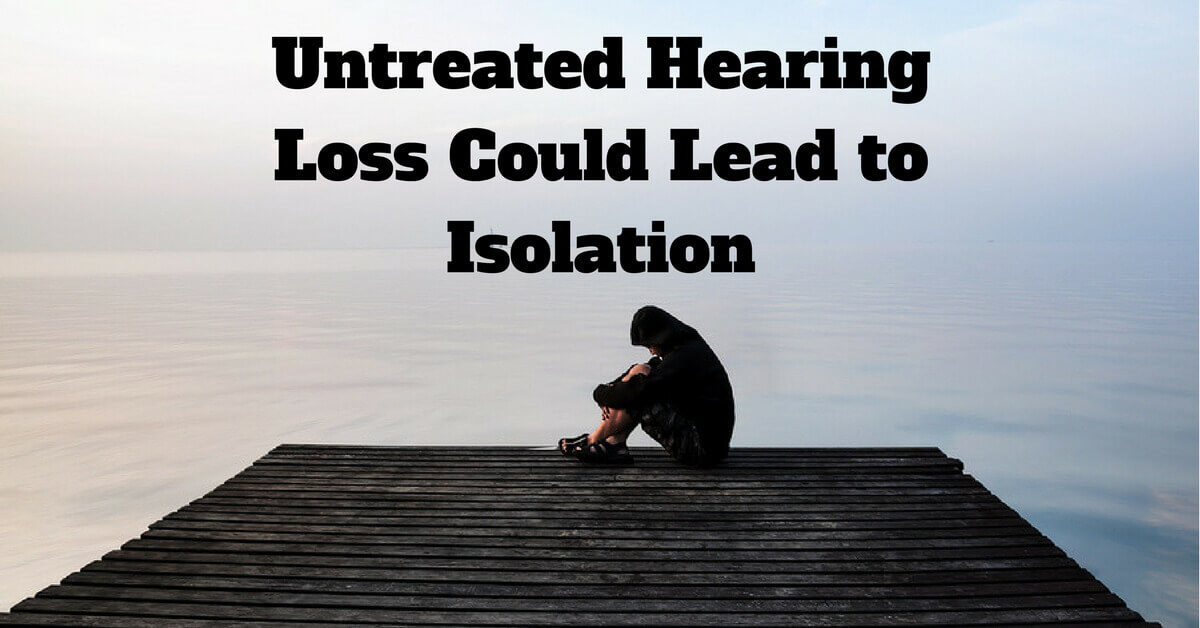 Untreated hearing loss has long been linked to a range of health problems, as revealed by medical studies concerning areas such as dementia, balance, heart disease, and depression. As the third most common physical condition in the United States, hearing loss affects 48 million Americans, and one in three people over the age of 60. Often times, as hearing loss is left untreated and gradually worsens, people learn new ways to adapt to the sounds and speech patterns around them. Some people get better at reading lips or social cues.

Even so, people with untreated hearing loss tend to retreat from their closest relationships and withdrawal socially. Over time, this could be linked to increased casts of anxiety, depression, and isolation.

In June 2016, Ear and Hearing reported that University of British Columbia researchers uncovered new information about hearing loss in older populations. Researchers found that “for every 10 decibel drop (roughly equivalent to the sound of calm breathing) in hearing sensitivity, the odds of social isolation increased by 52%.” This rate was found among seniors aged 60 to 69 years old.

With hearing loss, our ears take in less information, and over time, the parts of our brains that are processing and storing this audio data begin to slow. While people wait an average of seven years to treat hearing loss, the neural pathways that our brains use to process sound may become dull with disuse. A team of researchers at Johns Hopkins University found a potential link between hearing loss and dementia. When the brain struggles to hear and make sense of sounds and speech, this leads to a “cognitive load,” which tires out certain cognitive functions. As a result, people with untreated hearing loss may lose some of their speech comprehension abilities. For this reason, socializing becomes difficult, uncomfortable, and unpleasant.

In a separate report in Ear and Hearing from August 2014, researchers from Vanderbilt University reported that people who experience hearing loss are more likely to suffer from severe fatigue and feelings of low energy. Though the degrees of hearing loss varied among participants, researchers found that all participants reported low energy, with double the frequency of severe fatigue compared to the general population. This low-energy might also contribute to an avoidance of boisterous social settings.

If left untreated, the physical and emotional effects of hearing loss could have adverse effects on a person’s interpersonal relationships. Even the most active individuals may find themselves less interested in social events, interacting with friends and family, and due to stress and anxiety, more prone to social isolation. As a result, hearing loss has been linked to depression as well.

Communication is the foundation of any strong relationship. For older Americans, with one in three suffering from hearing loss, communication in a marriage or partnership could prove to be an obstacle. A survey conducted in May 2015 found that “of the 27 million U.S. adults with hearing loss, the number one cited relationship that suffered was the one with their romantic partner (35%), followed by friends, family members and coworkers.”

Often times, untreated hearing loss leads to confusion and annoyance in conversations. It may be easier to avoid interactions altogether. Social isolation with hearing loss occurs when we do not feel included in conversations that we cannot make out clearly, especially in noisier environments.

In Social Work Today, it was reported that adults experiencing hearing loss incorporate the negative aspects of hearing loss into their personalities, and “develop ways to cope with and manage hearing loss in their daily lives.” With untreated hearing loss, individuals might find themselves more irritable, anxious, or avoidant. When we find ourselves feeling this way, it’s no wonder that we’d prefer to avoid social events and communication with our nearest and dearest.

If you’ve noticed changes in your hearing, and you’ve found yourself withdrawing from your relationships with your friends, family, and community, it is important to take a stand. Schedule a hearing test with us at Neighborhood Hearing Aid Centers and take the steps the ensure that you do not become isolated from your loved ones.