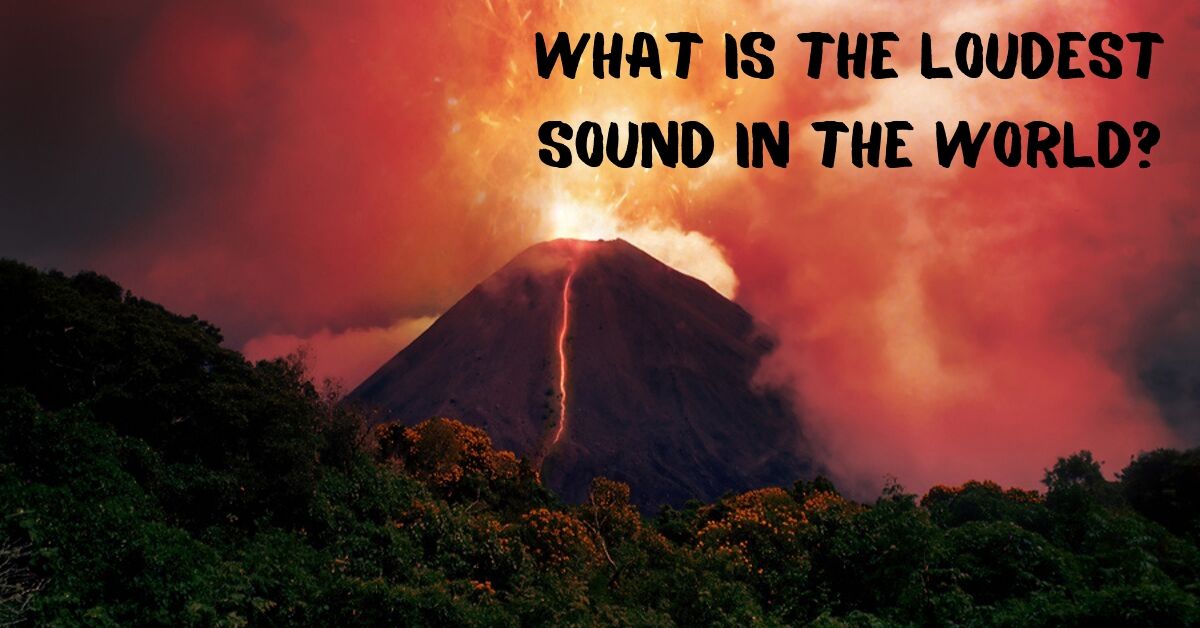 Have you ever been curious just how loud sound can be? Do you predict the source would be natural or made by humans? When do you think the loudest sound in the world might have occurred, and how could we possibly know?

If you have ever asked these questions, acoustic scientists do indeed have a theorized answer. First, what type of phenomenon might be able to cause such a loud sound? To get to the bottom of the question, we have to revisit the topic of the physical nature of sound. Sound is a process, a force of one air molecule against another. When those air molecules are pressed with enough force, they can travel long distances. Low frequencies of sound have the longest wavelength, or distance needed to complete one cycle. Scientists suspect that the loudest sound would include low frequency sounds, most likely, and it would create a very powerful force. What might be able to do this?

Acoustic scientists believe that the loudest sound in human history came from a very powerful eruption of a volcano: Krakatoa. On August 27, 1883, this volcano erupted in Indonesia with truly devastating force. How do researchers know that it was such a powerful sound?

This volcano eruption could be heard 2,233 miles away in Australia! Two ranchers at a sheep camp outside Alice Springs, Australia heard a sound like two gunshots at just after the time that the island of Krakatoa erupted. Yet, this anecdotal evidence is not all that scientists use to back up their belief in the loudest sounds. There is additional evidence that the explosion of the volcano sent a wave of sounds that traveled around Earth multiple times.

How can such an effect be measured? Well, recall how the process of sound works once again. The pressure of an event sets off a chain reaction of air molecules pressing into other molecules and passing along that force. As sound from the volcano passed along this force from one molecule to the next with such an incredible chain reaction that its effects could be measured in London, Toronto, and St. Petersburg. Compressed pressure in air molecules was detected around the world in such a pattern that it didn’t resemble any other type of weather pattern. With these compressions occurring around the world in this particular pattern, acoustic scientists believe that the cause of the pressure was indeed the sound waves extending from the Krakatoa volcano around the world.

Although there is strong evidence that this event caused the loudest sound, there are other incredibly loud sounds that occur every day, and according to some measures you might even say they are the loudest continuous sound events. These sounds occur under water and they are the clicks used for communication among sperm whales. Now, the way that loudness is measured above ground is in terms of decibels, and acousticians estimate that the Krakatoa eruption might have been measured at 172 decibels at a distance of 100 miles. Just imagine how loud it might have been up close! Whale communication, however, can be measured at 200 decibels under water, but the process of sound transmission is quite different. When one water molecule is pressed against another it requires much more force to make those molecules move through the relatively denser substance of fluid. When we adjust for the difference between fluid and gas, it is more appropriate to measure the sound of a sperm whale click at 174 decibels. For comparison, the sound of the Saturn V rocket was measured by NASA at 204 decibels—the loudest sound measured in close range.

With such powerful effects of the natural world on human hearing, it is no surprise that noise-induced hearing loss is so common. Krakatoa might be a single event, but the quieter phenomena of sound pressure in the natural world are occurring all the time. Hearing protection is crucial for this reason, not only in isolated noisy events but in any environment in which harmful sound volumes are present. If you are interested in customized hearing protection, contact us for more information about these remarkable preventative devices against the process of hearing loss.